This article focuses on how to secure your wireless network router so that you do not become part of the statistics. The wireless router typically includes a firewall that defines the perimeter of your network. Think of this as a fence, walling off your network from the Internet. Having a vulnerable wireless network allows criminals to ppossibly steal your data as well as Internet access. You could also become responsible for illegal downloading if your wireless Internet was compromised.

KRACK attack on Wi-Fi. Attackers can use this novel attack technique to read information that was previously assumed to be safely encrypted.  Virtually ALL Wi-Fi equipped devices need to be updated.  The attack is particularly bad on Android 6.0 and Linux. If you have a device with no updates (eg Internet of Things), you will be open to attacks.

You should not be using any non-802.11ac devices any more, if at all possible; and you should make absolutely certain you’ve updated the firmware on all routers to the latest available version.

If that newest available firmware version is older than November 2017, it is without a doubt vulnerable to KRACK, and you’re going to need to discard and replace that device. If it’s older than, say, July 2018 it might or might not include KRACK mitigations, and you should go through all of that device’s firmware release notes since November 2017 to make certain.

WikiLeaks has confirmed that insecure wireless routers were hacked and users spied probably by the CIA.  If you own a router on the list, update its software immediately or buy a new one.

In February 2016, the Federal Trade Commission settled charges with Asus, over critical security flaws in its routers that put the home networks of hundreds of thousands of consumers at risk.

The proposed consent order will require ASUS to establish and maintain a comprehensive security program subject to independent audits for the next 20 years.

Finally!, the government is forcing these manufacturers to fix wireless routers that can be come huge security holes.

The Wall Street Journal commissioned a security researcher to test 20 popular internet Wireless Routers in late 2015. 10 had known security weaknesses. 4 had old firmware that when upgraded could contain undocumented security problems.  Keep your router’s software update and if it is older than 2 years, you should buy a new one. Few routers automatically update their software, like Windows does. Most networking companies’ stop updating them after a year or two (They have no financial incentive), resulting in a major security risk.

Hackers can take control of insecure wireless routers to snoop on all your Internet traffic, initial denial of services attacks on others, or steal your financial information.

Some high speed Internet connections allow you to directly connect your computer to the modem.  We recommend installing a network router in this situation to help protect the computer from external traffic. Install a wireless router and turn off the wireless capability if you do not need it.

Secure wireless is an oxymoron! Using a hardwired Ethernet connection is much more secure than wireless Internet, a must for those looking for the maximum protection. Unfortunately, this is type of access is not possible for some devices (iPad, iPhone, etc.) and is far from convenient. Most users who demand the utmost in security and performance lay Ethernet networking in their homes and businesses. They may still run a wireless network, but limit access on that network to just a couple devices.

What is the most secure Wireless Router?

Wireless router hardware is available from many major manufacturers, including Apple, Cisco – Linksys, D-Link, or Netgear. We suggest avoiding smaller companies because they may be slow to update the software (firmware) and patch security holes. Unfortunately, even the large comes stop upgrade software on their routers after a year or two, you then should buy a NEW router. Fewer notify users of new software availability.

The best routers are more robust routers targeted towards small business. They have more advanced security and are updated more often. If you are not technical, forget about buying one.

Here is a good setup if you are concerned about security, are not a network expert, and need to have a guest network or have Internet of Things devices. (IE Nest Cam, Nest Smoke Detector, etc)  This configuration prevents these devices from snooping or intercepting your normal traffic. Using a typical Wireless router’s Guest network will NOT accomplish the same thing.

Kudos to Steve Gibson of Security Now. Buy or re-use a cheap old router that does not have to have wireless capabilities. We will be connecting them in a Y configuration. Connect this Router 1 to your Cable / DSL Modem.

Before you make any changes to your wireless router, always note how it was configured before the changes were done, so you can undo changes.

Access the administrator configuration for your wireless router by either running the software that was included with it or by accessing it directly from a web browser. For instance, Linksys router web interface for their wireless routers can be accessed when entering the following URL into your browser: https://192.168.1.1/ 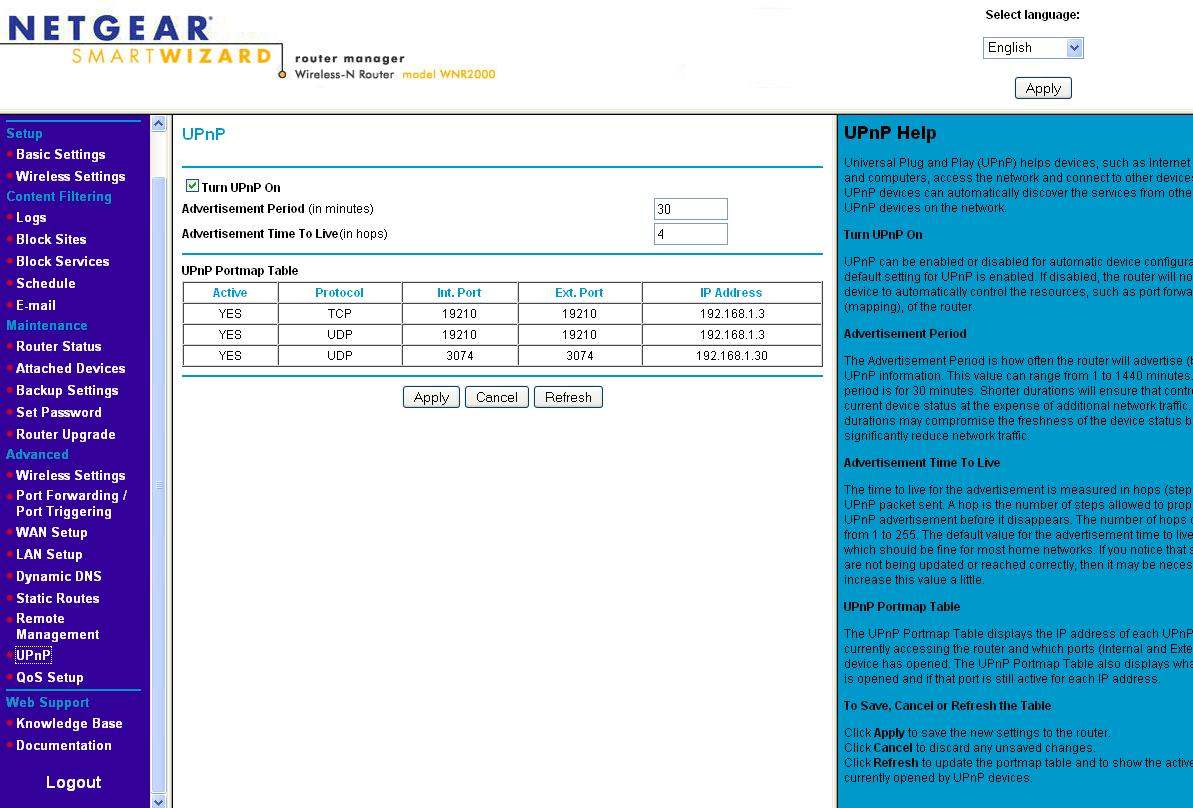 UPNP – Disable this feature.  Very Important! It makes your network much more vulnerable. Although adding devices will require manual action. You could also enable Universal plug and play only when adding a new device.

Wi-Fi Protected Setup (WPS) – Disable this feature (if possible) and enable manual setup, even though it makes setup much easier.  It makes your network much more vulnerable to external hacking. A flaw allows a remote attacker to recover the WPS PIN and, with it, the router’s WPA/WPA2 password in a few hours was uncovered in December 2011. Checkout our WPS article on this.

Some older Linksys routers have SecureEasySetup™ (SES), which can be disabled to increase security.

Set the DNS (Domain Name Server) that the router uses to either your ISP’s DNS Server or better yet, to Google’s high performance DNS: 8.8.8.8

Leaving the field empty could lead to DNS spoofing.

This is an IMPORTANT feature to look for in a new Wi-Fi router. If your wireless router is capable of setting up a separate network for your Guests and Internet of things (IOT – Cameras, Doorbells, etc) devices, you need to ensure that it is set up properly to prevent access to your main network. Keep in mind that some older guest networks (Linksys, Cisco) simply have a password but do not utilize wireless encryption such as WPA2. Buy a new router if this is the case.

Use a different password for this network and give this out to your guests.  Also place the following types of devices on this network, not your main network.

If you have a D-Link wireless router, be sure that the Enable Routing Between Zones option is not checked. This will prevent access by a guest network client, onto your main network.

If you have an Asus wireless router, be sure that the Access Intranet option is set to Disable. This will prevent access by a guest network client onto your main network.

If you own an AsusRT-N66U or Linksys E-series wireless router, make sure it has been updated to prevent the Moon worm.

Buffalo  makes wireless routers with DD-WRT pre-installed. This allows them to reduce the amount of software (firmware) they have to write, and concentrate their efforts more on hardware. If you are afraid of accidentally damaging your wireless router by installing 3rd party firmware consider purchasing a Buffalo High Performance wireless router.

By applying special settings to your wireless router, you can significantly increase the security of your wireless network to prevent theft and secure our privacy.

Also keep you wireless router’s software up to date and buy a new one every couple years, if there has not been an software update recently.

This concludes our How to setup a Secure Wireless Network Router  article. Other articles on Safegadget.com help you secure the other aspects of your personal computer, including How to Set up a Secure wireless network Router, and How to Secure Internet Explorer article, or How to Secure Firefox Article. Please see our other articles on security tips for your e-mail, iPad, online banking, online shopping, smart phones, and more.

Teaching users on how to secure their computers and gadgets. View all posts by SafeGadget

24 thoughts on “How to Setup a Secure Wireless Network Router”

This site uses Akismet to reduce spam. Learn how your comment data is processed.

Recovering from a malware infection

How to: Internet Security and Windows Security Made Easy

Free Security How to: Internet Security, Computer Protection with Addon Software on Macintosh

Free Security How to: Computer Security, Computer Protection on Macintosh

How to Setup a Secure Wireless Network Router

How to use Wireless Networks or Wi-Fi securely in Public

iPhone Security, How to securely use your iPhone

iPad Security, How to securely use your iPad

How to use Linux for more Secure Computing

How to: Safe Online Banking and Online Trading

How to: Safe Online Shopping

How to: Safe and Secure E-mail

How to Create, Store, and Use Secure Passwords

Recovering from a malware infection

How to: Internet Security and Windows Security Made Easy

Free Security How to: Internet Security, Computer Protection with Addon Software on Macintosh

Free Security How to: Computer Security, Computer Protection on Macintosh

How to Setup a Secure Wireless Network Router

How to use Wireless Networks or Wi-Fi securely in Public

iPhone Security, How to securely use your iPhone

iPad Security, How to securely use your iPad

How to use Linux for more Secure Computing

How to: Safe Online Banking and Online Trading

How to: Safe Online Shopping

How to: Safe and Secure E-mail

How to Create, Store, and Use Secure Passwords